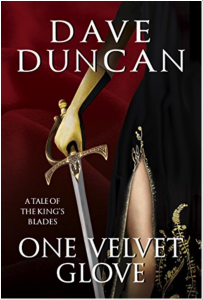 I was sent this book to review via the LibraryThing Early Reviewers, and I appreciate the opportunity to read it.

I know Dave Duncan can write well; I’ve read a few of his other works. I enjoyed the first of the King’s Blades series, “The Gilded Chain.” These are alternative 17th-century sword and sorcery fantasies with young men training to be magically compelled to protect their king.

This book, however, seemed like an afterthought in many ways. The author writes that he developed this book based on a small section of “Lord of the Fire Lands,” the second book of the series. However, I expected this to be a full-fledged series book. Instead, the promising plot degrades into a rather silly story that wastes the potential of the early chapters.

Each of the protagonists has an established personality and the characters were fun. Duncan can describe locations with skill, and the scenery was intriguing. Although the plot includes many perils, the blades seem to be so confidant, bordering on arrogance, that it hardly felt dangerous. The magic wasn’t challenging, since it was only wielded by a single, all-powerful figure whose backstory was lacking.

Again, I think the contemporary story could have stood on its own without relying on the flashback so heavily. The ending was too easy.

Overall, I was disappointed in this volume and wouldn’t recommend it for those who otherwise enjoy the series.