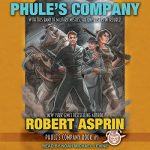 The plot is a futuristic military unit of misfits and the officer who tries to whip them into shape. The different personalities were enjoyable and some were well-developed. The pacing was good and the story moved along well.

However, my reservations are these: 1) the plot device of the officer’s butler introducing the chapters was unnecessary; the POV could have been third-party and just as good, and 2) the constant use of wealth to solve problems was a cop out. I think that the legion commander was too much of a wise-acre and I began to dislike him. He never had a problem he couldn’t buy his way out of. That was unrealistic and disappointing.

I listened to the audiobook and the narration by Noah Michael Levine was very good. There are a lot of characters in this story and the group was multinational (and multi-species), and most of the voices were quite distinct.