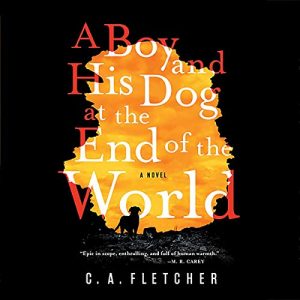 A boy lives with his family on a remote island after most of the people on Earth are long gone. A stranger steals his beloved dog and the boy decides to get her back. That’s the plot in a nutshell, and that’s the only thing you need to know going in. There are several big twists in the story, and I hope fellow reviewers don’t give them away.

This book, for me, was very sad. So many bad things happened to Griz that it started to get a little much. The author did quite a bit of foreshadowing via the first-person POV, and after a bit, I wasn’t surprised when another disaster came along. Griz showed constant resiliency and optimism, which equals hope. That was supposed to be enough to keep folks reading. It almost wasn’t for me, but I’m glad I stuck with it and hope you will, too. The themes are love of family, loyalty, and toughness in the face of adversity shine through.

The author narrated the audiobook and did surprisingly well. The writing was good enough that he didn’t have to use a lot of different accents so the listener could tell who was speaking, and those he did use were fine. The volume was solid throughout and the pacing was just right.

Includes lots of violence, including danger to animals. Some foul language. Animal lovers will find it hard-going.