Havisham: A Novel by Ronald Frame 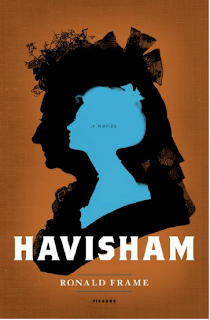 How did Miss Havisham of Great Expectations become of the character we remember from Dickens’s novel? That is the question this story answers, and it does it in wonderful form.
I’m always a little concerned about books that dig into the backstory of famous novels. We all have our imagined versions of the scenes, whether influenced by films or not—I can’t help imagine Miss Havisham as Martita Hunt played her in the 1946 David Lean film, for instance. I needn’t have worried, as this story doesn’t interfere with the classic, it simply adds to it.
Miss Havisham is raised as the daughter of a wealthy brewer, but one who wants his daughter to rise above her station—he has great expectation for her. She is isolated as a child and thus begins the molding of the persona. She is the guileless daughter and friend who is used by everyone around her. I found her naivety more than annoying at times, but wondered how much my modern point of view was blocking the authenticity of the times in which she may have lived. Was it her innocence or was it stupidity? I concluded that it was both, unfortunately.
The pace of the writing was good and I read this book very quickly, which is unusual for me. There were no subplots or side stories to muck with the plot. The viewpoint is that of Catherine Havisham, and told chronologically; it’s all very straightforward.
There were few main characters, another plus for me. I do wish that the characters were a bit more fleshed out, but we see them through the limited scope of Catherine’s life, and that is a narrow scene, indeed.
The language was very literary and included many references to music, poetry, and prose of the late 18th and early 19th centuries. I would have loved to have more information on those works, because without knowing their origins, the references went over my head in many cases.
The book contained many lines of back-and-forth dialog that did not include any reference to who was speaking, which is very confusing to the reader. I personally and professionally dislike this and would highly recommend the author modify that before final publication. The reader shouldn’t have to double back to find who said what.
Overall, I enjoyed the book very much. It added to the original classic and took nothing away. Highly recommended for readers of historical novels and classics.
Genre: historical novel
Publisher: Picador
Publication date: November 5, 2013
Note: I received this ARC from the publisher in exchange for an honest review.
FTC Disclosure: I have an affiliate relationship with Amazon.com. Some of the links in this post may go to their site. If you purchase something using that link, I may receive a small compensation. I am never paid to review books and am always brazenly honest (ask my husband). Thank you!