Sea of Rust: A Novel 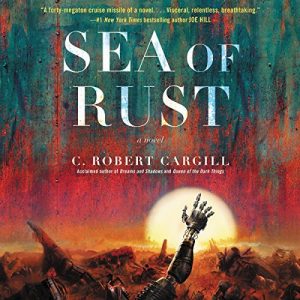 I really liked this sci-fi tale, written from the point of view of a robot who hunts other robots. On post-apocalyptic Earth, robots have taken control and have destroyed humans. Now they are becoming obsolete themselves, and some of them scour the wastelands, tracking older bots for parts to trade.

Meanwhile, the mainframes who control the processors of the majority of other robots (like the Borg on Star Trek) have been fighting each other for dominance, too, and their minions are terrorizing the free bots.

There was certainly enough tension to go around, and danger was everywhere; lots of chasing, firefights, and hiding throughout.

In addition to the action, however, death was a huge theme in this book. The prevalence of the characters’ thoughts about their “lives” ending was almost overwhelming. They also felt guilt over their actions against humans in the war, and that was a brilliant addition to the story, in my opinion.

Cargill infuses the bots with personalities and foibles, so readers might forget at times that they’re not reading about humans after all. Each major character had their own personality and was unique in some way, as ironic as that may seem. Great characterization throughout. I hope there’s a sequel (or two).

Lots of robot violence (mostly with guns), no sex, some foul language. Ms. Kaminsky did a very good job with the voices of the many characters and I enjoyed her narration.