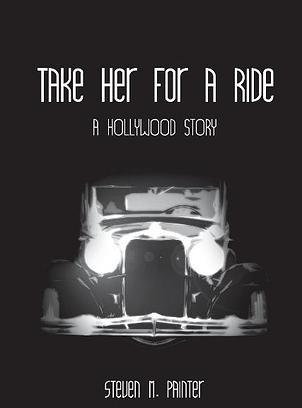 Review: Take Her For A Ride: A Hollywood Story

By Jan
Take Her For A Ride: A Hollywood Story by Steven M. Painter
Genre: Historical Novel
This is a true Hollywood book, including the bright lights of the movie studio back lots and the back streets of depression-era America. The time is 1930, when the studios held all the power, and starlets came from all over the country to try to make it in the movies.
Paul Russell is a successful producer, working for an almost-broke studio. Lillian Nelson is a young actress trying to make it on her own. Their romance is tense, brokered at times by Paul’s secretary and Lillian’s roommate, Vera. Among the other characters are obnoxious studio executives, temperamental directors, and actors who are bizarre, freewheeling, nasty, and even kind.
Quite a few “real” people are either characters or make cameos in the book, and I’m sure they must be authentic as far as history can determine, because the author is extremely well-educated in this era and in film history. His passion for the subject is obvious in the time he spent with his book.
The writing is very good, including descriptions that are, for the most part, not overblown or underworked. The third-person point of view is fine, although most of the book concerned Paul; I think it could have been told from his point of view, too. The technical aspects of the book were good and I found very few errors in my ebook version.
My only objection—and I admit it is a big one—is that the characters didn’t project any real feelings. They do things, they say things, but we aren’t privy to what’s in their minds. Mr. Painter could have taken advantage of that third-person POV to get into the heads of all of the characters, but instead, we don’t know why they do or say things.
Consequently, I didn’t like any of the characters very much. A character-driven story like this one should include people to whom readers can relate (good or bad). I personally wasn’t feeling much for either Paul or Lillian, and I believe that is because I didn’t know what they felt.
Overall, I enjoyed the story but wish I knew (and liked) the characters better. I hope Mr. Painter keeps writing about the subject.

FTC Disclosure: I have an affiliate relationship with Amazon.com. Some of the links in this post may go to their site. If you purchase something using that link, I may receive a small compensation. I am never paid to review books and am always brazenly honest (ask my husband). Thank you!