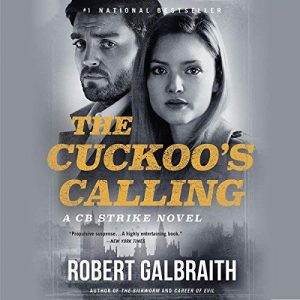 An excellent mystery involving the death of a famous model in London. The main character, Cormoran Strike, is a private investigator on the downside of luck, interesting and flawed, and the reader is definitely invested in him after the first few chapters. His backstory is slowly revealed but there is plenty left to learn in future volumes.

There are quite a few characters (mostly suspects), but they are separated by believable stories and the skill of the narrator. Robert Glenister does an outstanding job with the narration. There are many different UK accents and he nails them (as far as this American can tell). His pacing was terrific, too.

This is not a usual genre for me (I prefer historical fiction) but I enjoyed the story. There is plenty of bad language in this one, so beware if that offends you.

This is the first of a series (currently, four) of Cormoran Strike books.