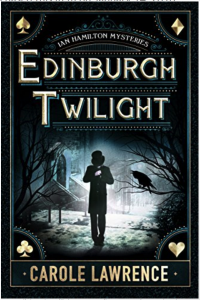 Great characters . . . and Edinburgh. Seriously, what else could you ask for?

This historical mystery was very well written and plotted. As with all mysteries (IMO), the pacing slows in the middle of the story as the protagonist struggles to put a case together, but it picks up speed at the end. The 19th-century atmosphere was dark and chilly, as was the story of a serial killer who terrorized the city and the imperfect police inspector who tried to stop him.

My only hesitation is that some of the male characters were homosexual. Is it now mandatory that every book must include gay characters or a plot built upon their communities? Instead of finding this inclusive or politically correct, I thinks it’s simply not necessary.

There is some violence applicable to the story but nothing gory, no foul language, and nothing overtly sexual. I would definitely recommend this book to mystery lovers, especially those who prefer historical mysteries.