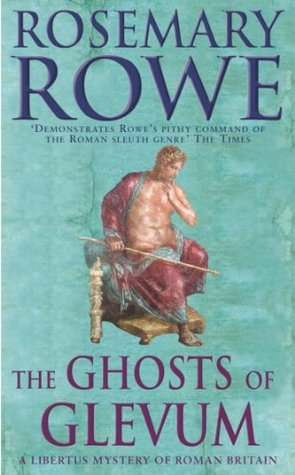 Review: The Ghosts of Glevum

This series of historical mysteries is set in AD 187 Roman Britain. Libertus is a pavement artist; he makes beautiful mosaic floors for the wealthy citizens of Glevum, what is now Gloucester. This is the sixth book of the series.

Basically, I kept reading this story because I like Libertus, a reluctant detective who was formerly a slave and therefore can appreciate a good thing when he sees it. However, many of the supporting cast in this volume were not good things, and he only spends time with them because he’s forced to. And I don’t only mean the beggars and theives . . . the rich and powerful were just as bad. This and the descriptions of the living conditions didn’t make the story any more enjoyable to read, but it did make Libertus shine in the darkness.

Furthermore, Libertus either had to solve this particular mystery or lose almost everything he has. That dark side was very evident in this book, where Marcus, Libertus’s patron, was accused of murder and treason. This leaves our hero with no help from his main supportor or anyone else nearby.

Ms. Rowe’s descriptions are excellent, as usual, but the pacing was a little choppy. Perhaps that was intentional because of the hero’s circumstances; he had to sit around and wait a lot.

The mystery itself was a bit of a letdown. Libertus must rely on the “ghosts” of the story to help him investigate, and it felt like he wasn’t even present for most of the legwork, which is half the fun.

I’d taken a hiatus from this series for several years, and I’d hoped for more from this volume. I will give Libertus one more try before giving up.

This story contains some violence, no sexual content, no foul language.